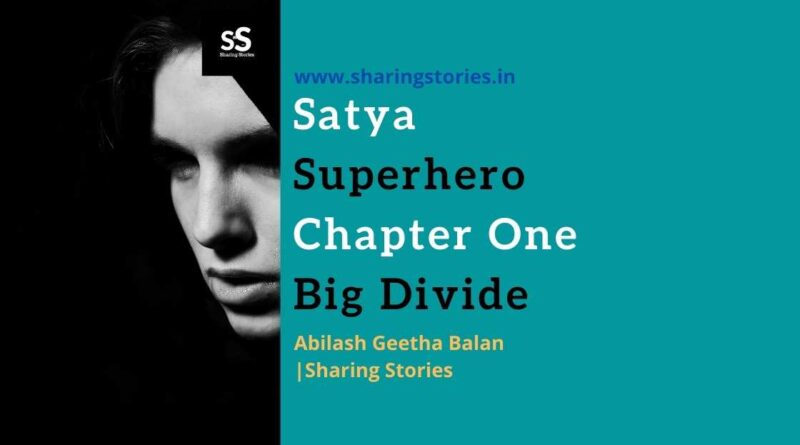 Satya - Superhero from the Future

Hi, I am Satya. I am a superhero and my superpower is that I only do the right thing. I am from your future, I mean; I am from the future of Humanity. I represent each one of you. I am made of the good and the bad, the pure and the evil, the right and the wrong, I am a human and an animal, rich and the poor, black and the white, god and the demon, left and the right, man and a woman. I am not the extremes, rather, the collective voice of both sides. I am the true rightful voice of your inner soul.

I am here to tell you the things you guys screwed up, things you should have acted upon, keeping your differences aside. Things which have made the world the way it is today, ‘Chaos in Harmony’. Till now, I have tried to keep quiet and let you make your decisions, however, I feel it is time for me to breach your perceptions and take charge of your true inner soul. And, I want you to do the right thing.

Let us begin from the Origin of the Earth. The opinion here is largely divided and has been debated for over many centuries. Some of the most popular such divisions are based on various religious and scientific beliefs.

In the scientific world, some strongly believe it is the big bang theory, while others claim alternative theories like eternal inflation and the oscillating universe. Amongst the religious divide, the world was made in 7 days, Lord Brahma created life on earth through the river Ganga and Earth being built over 6 yawm (over a long period of time) are amongst the most widespread.

Since, it is fairly impossible for humans or rather any form of life on earth to have witnessed the origin, and even if someone had witnessed such a marvellous event and was able to record the whole phenomenon in a written text or a lengthy poem, it is almost certain that the actual story would have changed its course over time. This is a high possibility due to the following two reasons, first, history is written by the most powerful king and not the rightful and second, have you heard of something called a Chinese whisper? In the first reason, mankind has lost many knowledge and literature due to invasions and other natural disasters. And secondly, it is impossible for a story to remain in the exact form and fir for over 2,00,000 years. The amount of time the human race is said to have existed, or even 6000 years since we started claiming ourselves as civilized.

In today’s time, even with such advanced communication modes and technology, it is impossible to trust media and news floating around. The actual news is controlled even today by the most powerful men and loses its course due to a lot of false news on social media. Now imagine how could anyone be certain what had happened so many years ago. Even knowing what has happened 500 years back could also be highly arguable. So, it is quite normal that this “Divided Opinion” on how all this came into existence is expected to overcome the test of time and here to remain.

Now let us do a small perception test. Be honest and introspect what IMAGES come to your mind when you read the following words. Take a few seconds and do not hurry.

Each one of you would have either visualized an image from your memory; either you have witnessed it through your own eyes or maybe through a photo/video which you might have seen on TV, computer, newspaper, etc.

Now listen carefully, “The Truth is never an absolute voice, it is always hidden in between the various versions of it.” Of all the possibilities, in both the scientific and human belief system, there was one underlying commonality. Each of the above items is the creation of the creator, the person whom you call God.

The first eight things listed above are not divided in the name of religion or science, it is common to all forms of life, and it is only you, the humans who are divided in the name of the creator. A creator, who has left behind all his creation. And now if you really look closely, you could hear the collective voice of each of these elements together, we call this Nature. The ultimate creator and preserver, the living God, whom we can see, smell, touch, hear and taste. Known is a river, the unknown is an ocean. So let us start respecting nature and preserve it as God. Without nature, you and I are not possible. By nature I mean, all its elements, air, water, land, fire, ether and all the life forms in it.

Renewal: Your Unexpected Role In Saving The Planet book by Author Sandeep Nath

When Fate Kicks by Piya Gajbe

Piya Gajbe Book Title : When Fate Kicks Piya Gajbe is an advocate and a writer by choice. Having written

This is an example widget to show how the Right Sidebar looks by default. You can add custom widgets from the widgets screen in the admin. If custom widgets are added then this will be replaced by those widgets.